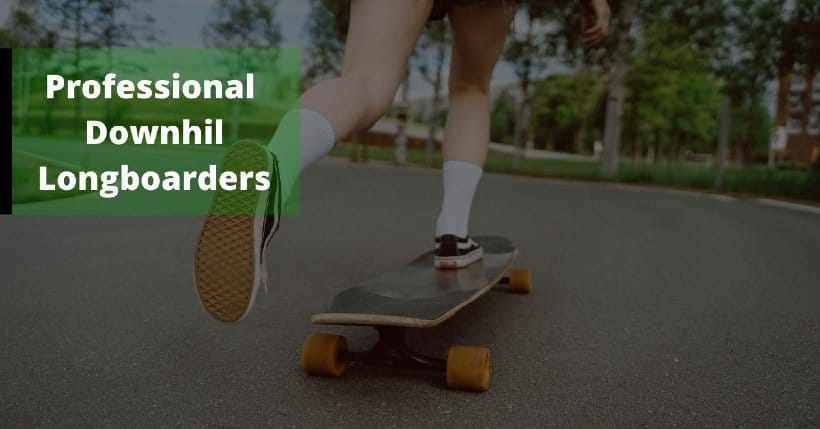 When you hear of Downhill Longboarding, what do you think of?

What is it? Downhill longboarding involves riding down a hill as fast as possible, keeping the board in control. The main goal of Downhill Longboarding is speed and nothing more.

It can be very addictive due to the adrenalin rush that one gets down the hill; it soon becomes a way of life. Downhill longboarding is labeled one of the most dangerous sporting activities they are!

What kind of people qualify to be Professional Downhill Longboarders?

Downhill Longboarding is all about risk-taking, requiring people with a strong heart, not faint at heart. Some may call them ‘the reckless that live with wish to be dead.’ That can be true because these are people who live to their fullest, living intense moments to make themselves feel alive, sports enthusiasts.

Professional Downhill Longboarders have more to them; they are committed people with technique to handling all the dangerous situations in Downhill Longboarding. They are responsible for personals who thrives their limits without the fear of facing dangers. To be a professional, one needs to control one’s emotions, be fearless, and be a lover of speed.

They can be of any age as long as they are physically fit and well trained. Downhillers have unique skills and talent to use to its fullest to prevent a fall and stay in the game. Professional Downhill longboarders know how to prevent and reduce the risks by taking all the necessary precautions starting with clothing, good downhill wheels, trucks to helmet & pads.

Who are these Professional Downhill Longboarders?

There are about a thousand or more Professional Downhill Longboarders across the world. Let’s explore their experience in this sporting activity, but we will only look at the few with world rankings.

All of their speed records are over 80mph. 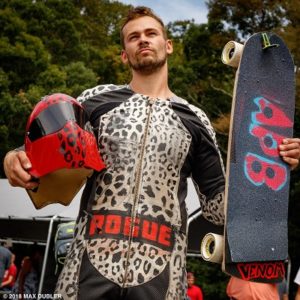 Daina Banks a man well known as the flying leopard because of his speed. He is from the United States of America, born in Federal way Washington. He had had 10years of experience in Downhill longboarding and has had 13 races as of now.

Daina had the best win of his life when he won the North America Continental race. His favorite race was also in North America, the Killington. Daina is well experienced in this line of the job as he has mastered a lot of skill in his 10years.

His experience was improved with the help of Peter and Calvin at Foothills Pedorthics. His high-speed sliding skills improved, and has enough control of his speed and trajectory. In the world ranking, he is number 2. 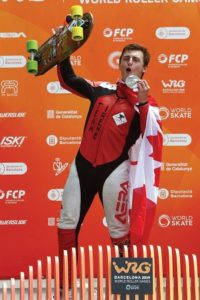 Dane Hanna is a professional downhill longboarder from Canada. He was involved in 8 races so far. He is at the top of the world ranking because of winning the World Roller Games in Barcelona and Spain. He also completed the Senior Men’s skateboarding coming out in second place.

Dane Hanna has many skills up his sleeve, but his most skill is the Downhill tackling. This requires art to shrink down in order to reduce the resistance of wind and increasing the speed. It is done by first placing your right foot in the front of the truck toes facing in front.

The foot of the back is then positioned behind the front foot. Both knees will be bent at a 90degree angle with the knee of the back tucked in your front foot. The upper body should be leaned ahead, nearly horizontally folded tucked supported by front thigh. Lastly, your arms are tucked in behind of your back to increase speed.

He is from the United States of America and has had 11 races so far. He is world ranked number 3. In 2019 he became the Red Bull No Paws Down Champion. In the last race of the Asia-Pacific tour for Arirang Hills race, he won first place, beating the second-best racer Carlos.

His high-speed sliding skills are the best as he has mastered the ‘Red Bull No Paws Down sliding’ It does not involve hands on the ground when sliding downhill. Chase Miller knows how to react in an air vacuum as well. He waits until the last moment of the vacuum and breaks out slowly, picking his speed and quickly overtake the next rider in front of him.

Emily Pross is a woman if example fighting her way to the top. She is from the United States of America and has raced nine times in different counties. She is world-ranked at 7. She is the new Pro-model. Emily Pross is a gravity addicting riding downhill as fast as she can and winning the price.

Emily Pross is skilled at downhill carving. It is the most important skill for shaving off speeds on hills. It harbors accidents when one encounters speed wobbles during the race. Successful users of longboards like Emily Pross reduce the speed problems by keeping more weight to the front truck as their muscles are relaxed.

Davis Lanham is from Australia and has raced ten times so far. He is ranked number 5 in the whole world. He has successfully mastered all the necessary skills for the game. Foot braking is one of the main skills he has learned. It involves dropping the back foot and dragging it through friction at moderate speed.

Zak Mills-Goodwin is from Australia and had five races that he participated in. His world ranking is number 5. He is good at mastering one of the essential skills in Downhill boarding that is drafting.

Drafting involves riding at high speeds closely behind other rider, as they become a windbreaker, and overtake them slowly at great speed. This leads to an inevitable win on anyone’s part, and you keep yourself at a good speed.

Although Downhill longboarding is a dangerous sport that can lead to death or straight ER when one falls, many people practice it. Both men and women have successfully taken it up as a profession; why is that? Is it easier than it sounds or maybe not dangerous at all?

Kryptonics Torpedo Skateboard Vs Penny Board (5 Key Differences & Best One For Your Kids)
Top 6 Best Skateboard For College Campus In 2022
Can you Ride a Hoverboard in the Rain? | Are Hoverboards Water Resistant?
Best Electric Skateboard Under $500 In 2022 | Ride Like A Pro
How to Clean Longboard Trucks In 2022 (Step By Step Guide)
How to Clean a Skateboard Bearing | Why It Is So Necessary?
Cal 7 Skateboard Reviews In 2022| Detailed Review Of The Remarkable Brand!
Is one side of hoverboard not working? | How To Fix The Issue?